Gstaad Automobile Club top of the podium at Carrera Panamericana

After 7 days of frantic racing, driving under infernal conditions, in an unpredictable car and on their first attempt, Erik Comas and Isabelle de Sadeleer, Gstaad Automobile Club members, saw their gamble pay off as they went on to win the 2014 Carrera Panamericana!

La Carrera Panamericana, the most mythical of road rallies, was held between the 17th and 23rd October 2014 in Mexico. Two teams made up of Gstaad Automobile Club members took part in the rally, one led by former F1 driver Erik Comas and the other by the youngest driver in the competition, Jérôme de Sadeleer.

Covering 3,000 kilometers across Mexico, between the two legendary cities of Veracruz and Durango the rally is a dream come true to fans of one of the most stunning ‘carreras’ in the world. Participants also have the unique chance to meet some amazing people as well as discover little known parts of Mexico.

A rally such as the Panamericana is also about tradition, heritage and sharing the experience with classic cars being piloted by enthusiasts such as Erik Comas behind the wheel of his 1953 Studebaker. With co-pilot Isabelle de Sadeleer by his side, he signed up for the ‘Turismo Mayor’ category. The Frenchman and Swiss woman, being used to such demanding races, had nothing other in mind than to win the Panamericana. They also set the stage for Jérôme de Sadeleer and his co-pilot Caroline Wilhelms at the wheel of a 1965 Ford Falcone which was entered in to the ‘Historica C’ category.

The Gstaad Automobile Club was honoured

Throughout the race Erik and his team mate Isabelle showed nerves of steel, despite a sticky start.

From the set out the pair were hit by serious mechanical problems making the Studebaker difficult to control. Despite this set back they managed to catch up with Emilio Velasquez’s team during the final stage of the race.

Finding himself under pressure from the Gstaad Automobile Club members, the local man saw his lead begin to drop away prompting him to take serious risks that ended with him coming off the road. This allowed the experienced Erik Comas and his brilliant co-pilot Isabelle de Sadeleer to win their first ever Carrera Panamericana: a quite remarkable achievement.

Behind them were Douglas Mockett and Angélica Fuentes who took second place whilst Luis Alfonso Cervantes and Luis Pablo Cervantes took third.

As the youngest drivers taking part in the 2014 Carrera Panamericana, Jérôme de Sadeleer and co-pilot Caroline Wilhelms were singled out for their tenacity, youth and smiles. The young pair faced mechanical problems during the long race days in Mexico but nonetheless and despite all reached the podium several times. Yet another remarkable performance!

To see photos from this amazing competition visit our event gallery : Gallery 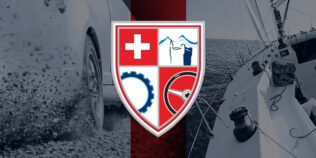