To reminisce: to recall past experience

One can say that the week, and especially the 69th edition of the 24 hours of Spa, was full of experience – that’s as far as I am concerned. In true honesty, I did regress this weekend as my lap times where simply not there, but what an experience it was – first time driving in Spa at night during the race, first time I had a tire alarm that turned out to be a puncture, first time having to creep up Eau Rouge in the middle of night and first time restarting the car desperately to finally make it back to the pits. I don’t believe that I’ve had so many new experiences in one race!

Bronze Session : it all started fine, getting back into the rhythm until I had a spin at Les Combles that ended up in the tire barrier. The front of the car was damaged, but I was able to bring it back. However, the complete bronze session was lost, and my co-driver did not get to drive. What happened? I tried braking later, 12-13 meters. It all worked well until I hit the apex, the middle of corner. I was carrying too much speed and the car spun. You need to understand that driving, especially racing cars, is all about weight transfer. Take your hand and level it straight in front of your eyes. Now imagine the hand it your car. You break, what happens? The weight moves to the front. So imagine this, take your straight hand and now point the fingers toward the bottom – now the front of the car is pointing downwards and the back of the car is in the air (those are the dynamics of braking). Now imagine turning the car in that form, so imagine your downward pointing hand turning. What happens? If you don’t apply some throttle, which brings the back of the car down (so now the back of the hand should go down) or if you don’t counter-steer, the car spins! It’s all nice reading this, but in real racing, it happens in a split second!

Free practice : it was all wasted, as an engine sensor that kept on cutting the engine’s power, took hours to be identified. The bronze session’s crash most certainly damaged the sensor.

Pre-Qualifying : went well, all the other drivers got to drive the car.

Qualifying : we used the session as a free practice. All drivers did their job.

Race : the race started and it took less than 2 minutes before a full course yellow (FCY) was deployed by the race director for a Ferrari stock in the gravel. A FCY requires all the cars to limit their speed to 80 km/h. Within 3.5 hours of the start, 2 FCY and one safety car had been had been deployed. I was the fourth driver out. Unfortunately, after 3 laps I got an alarm from my rear left tire. I thought it was mistake and called it in. There was some miscommunication, and I went one lap too much around the circuit with a punctured tire. I was able to come back to the pits, but had damaged the car and we lost 5 laps repairing it. I then went out again. It was 22:30 when I finished my first stint. I showered, had a massage, and went to bed before I was awoken at 1:30 am to take over my second stint. However, my co-driver had been driving his entire stint under the safety car (again!) and it was decided to refuel and send him back out. So it was not for another hour before I jumped in the car, 2:30 am. The team had warned me that the clutch was broken and asked me to follow some procedures. However, I tried to start the car, but trouble arose. I was at the end of the pit lane and it was too late to stop. I creeped up Eau Rouge at 23 km/h as cars were passing me at full speed. Suddenly I lost power and became a sitting duck at the top of Eau Rouge, without lights, and cars passing me at 230 km/h. I was hoping that cars would not hit me. I tried desperately to restart the car, using a number of different tricks – cutting the master switch, rebooting … etc. But nothing worked. I was stuck in first gear and could simply do nothing. Finally the marshals came out and used a truck to toe me. That did not work well. As the clutch was broken and the car was stuck in first gear, the car hook broke. I called in my engineer, who explained a number of procedures using the AGS (Auxiliary Gear System) button to put the car in neutral. The AGS is a way to bypass the car’s ECU (software) to manually fiddle with the gears. The objective was to at least put the car in neutral for the marshals to move the car. After several tries, I got it. Then I tried to engage first gear again to get back to the pits. That did not work. I tried and tried and tried, desperately trying to get the car to move. Then I decided to leave the AGS on, something that you are not allowed to do. I figured that I might try something new. I left the AGS on, put the car in first gear and tried to roll the car. IT WORKED! I let the team know that I was on my way to the pits. Once in the box, the car was repaired and the team took the time to change the brakes pads – a mandatory procedure under the new rules. I then went out, but again was stuck under a FCY, a car had hit the wall on top of Eau Rouge. Upon restart I drove my lapse to the end of my stint. Driver change. Shower, massage and back to bed. It was 4:45 am and I was due back in the car at 7:45 am! At 8 am I was awoken by the team manager and co-owner, who informed me that we had abandoned with a broken clutch. It was the end. I slept until 9. Got up, packed my bags, said good bye and left the track.

We managed to race 14 hours. Our next and final race is at the Nurburgring on the third weekend of September. The season is slowly coming to an end. 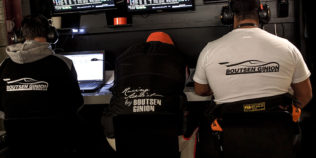