Hockenheim : finally some points, but again a mistake

It was one of the smallest circuits in the championship, but it was super technical.  As usual the circuit is divided into three sectors (S1, S2 and S3).  The first corner of S1 is very challenging, as it has a “banana” on the inside curve, for cars NOT to cut.  However, the outside of the corner is also challenging due to “track” limit warnings should you try drive too wide.  Hence, it’s tricky to adjust your correct line.  The same goes for T11 (S3), but this time the banana is on the outside of the corner, but you can drive on it.  Then comes T12 (S3), a hugely blind corner in 4thgear.  The problem there is that should you go too wide, you end up in the gravel!  Then there are the last 2 corners between T16 and T17 in S3.  You need to glide your car for a fast exit.  I hope you can appreciate the technical aspects of the circuit.  A small mistake can cost a lot in terms of time.

We started the weekend on Thursday with a 4 hour paid session.  All drivers had a chance to get acquainted with the track.  We had been to the track in April to test it, but it was under the rain and we did not get a lot of data.  Being in the dry gave us the chance to really test the car and have a first look at the setup.

The only event on Friday was the Bronze test, reserved for the bronze drivers.  As the only bronze driver in the line-up, I had the full session to myself.  It went well, building confidence and learning the track.

The “real” weekend started on Saturday with free practice followed by pre-qualifying.  On Sunday we had qualifying in the morning and the race in the afternoon.  Unfortunately, I messed up my qualifying by a good second, which would have put us up on the starting grid.  I started the race.  On the first lap at T6, the safety car was deployed due to a huge crash.  It took 25 minutes before the safety car was pulled in and the race continued.  It went well for me, but I got stuck behind a slower car.  It was very difficult to pass and I did not want to be either bashful or take risks.  5 laps before the end of my stint, I made a small mistake by holding my brakes a little too much in T12.  This caused the rear to snap and I went off into the gravel.  I was able to continue on the gravel and rejoin the track.  It cost us 30 seconds.  Benjamin and then Adam took the wheel, Benjamin doing a great job gaining position and then Adam.  We finished 7th in class.  Without my mistake we were shooting 3-5 place.  We are not going to be too critical about it.  We finished.  I improved.  I got confident in traffic and passing.  I am finally getting a grip of the new car.

Our next and last stop will be Barcelona at the end of the month.

I would like to thank everyone for reading these lines, and if you have any questions, write to me via the newspaper. 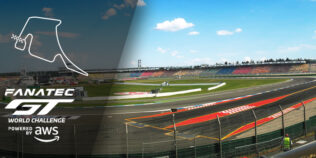